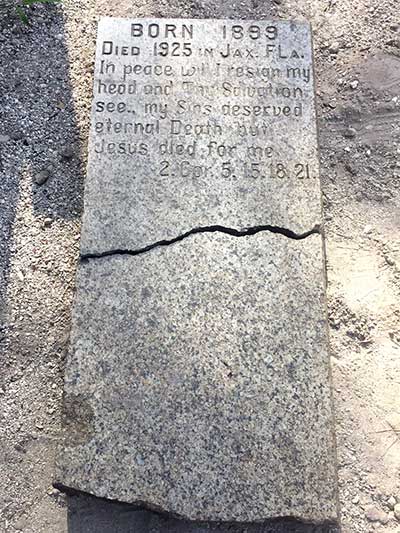 TerraWise Homes has been leading the revival of new homes in historic Springfield since 2013. During that time, they have built several homes bringing forward the latest energy efficient net-zero energy technology while maintaining the character of the neighborhood by designing homes that blend perfectly with the historic architecture. Recently, they went from creating new family histories to turning up a chapter of forgotten history for one of Springfield’s early families.

According to company president Melody Shacter, a new irrigation system was being installed at the TerraWise Homes’ model at 1221 North Liberty Street when the crew uncovered an old gravestone of Martha H. Troeger. Shacter contacted the Springfield Improvement Association and Archives and their historian Jeff Gardner researched the family.

Troeger is actually buried in the Evergreen Cemetery.   She was a nursing student and nearly 26 when she died in 1925. Gardner is attempting to determine why Martha’s family had two headstones made for her, and why one came to rest at this location; however, the property where the TerraWise model is located was originally her parent’s home. Gardner’s research led to a few of Troeger’s relatives and he took the lead in trying to make contact. He was finally successful in early June.

“I made three calls to people I had determined were relatives of our Martha H. Troeger,” said Gardner. “I was able to connect with one of them, Frederica Mathewes-Green, who lives in Baltimore. Her grandmother, Esther Viola Troeger Oetjen, was Martha's sister. She is very excited about the find and wishes to acquire the gravestone on behalf of her family. She also has a sister who lives in Jacksonville, so this will likely be its next, final resting place.”

Gardner, along with Melody and David Shacter, made a presentation of the gravestone to the heirs on Saturday, June 17 at the TerraWise Homes model.

“Between completed homes and those currently under construction there are now over 30 TerraWise Homes in Springfield,” said Shacter. “Our office is also here on Main Street and we are proud to be a part of the revival of this great neighborhood and now to play a small part in the preservation of its storied history.”