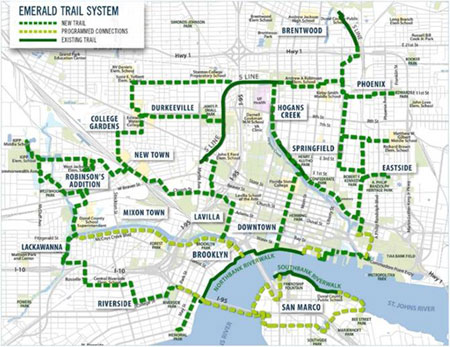 The evolving Emerald Trail System got a potential shot in the funding arm with news that several million dollars from the proposed increase to Jacksonville's gas tax could go to the project.

This is good news for everyone living north of the downtown where the expansive trails system is envisioned, including historic Springfield which would have legs of the planned extension running along both sides of the neighborhood. The Emerald Trail is planned to be a 30-mile multi-modal bicycle and pedestrian system with linear parks along the way as it connects 14 historic neighborhoods and downtown Jacksonville to other existing trails and planned trails, schools, businesses and more.

Read about the potential gas tax funding in the Florida Times Union and see details on the Emerald Trail being led by Groundwork Jacksonville. Then contact the Jacksonville City Council and share your enthusiasm for using funds from the gas tax to help make the trail happen and make historic Springfield and Jacksonville a more pedestrian rich place.