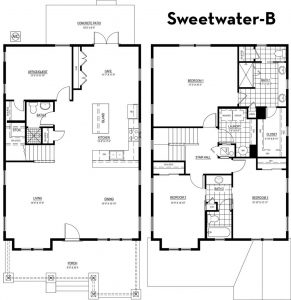 We introduced the Sweetwater plan as a model home way back in 2013 with the launch of TerraWise Homes. It won several Parade of Homes awards and strong sales followed as TerraWise began to lead the renaissance of new home building in Jacksonville's historic urban core neighborhood.

Since then, we have introduced several other well received plans to our Springfield line up. Now, it's time to put what we've learned from building numerous Sweetwaters with feedback from many buyers and hundreds of visitors touring the model.

The new Sweetwater-B introduces several changes to the front elevation and architecture of the home. Most notable are the rusticated block porch foundation and column pedestals. The porch is also enhanced with a new roof line and front facing gable. Also, new dormer windows stacked on the lower and upper levers along with a round decorative window accenting the second floor.

Inside, the biggest change to the floor plan are improvements to the kitchen and café. The space has been opened up moving the large pantry into the café and removing the wall in front of the kitchen island. Counter top space is also increased. Bath 3 is also enlarged.  Upstairs minor tweaks improve the overall flow with all the same features that make this home one of our most popular in Springfield. Preview it here on the website. Interested in owning a Sweetwater-B, there are currently two underway in Springfield as Quick Move Home opportunities.

Contact us to learn more about the available homes or building a Sweetwater-B in historic Springfield. This or any of our plans can also be built on your lot in our Jacksonville service area.