Two photos of the PV Solar Meter readings on a TerraWise Home.

The TerraWise team was recently interviewed by Branden Bern from WJCT for a story about the JEA Solar Net Metering program on his popular ADAPT Florida podcast. As one of the top solar builders participating in the former JEA Net Metering Program, TerraWise was at the forefront of the surge in new homes with PV Solar Power Systems. Unfortunately, JEA abruptly changed the program in early 2018 cutting the rate it pays homeowners for power generated by their solar systems to a fraction of what it charges for power. This effectively wiped out any reasonable return on investment and has ended most of the interest in private home-based solar power systems in Jacksonville.

For those not familiar with the history of this issue, some background is eyeopening and will likely be covered when Bern's podcast on the subject airs in the next few weeks. 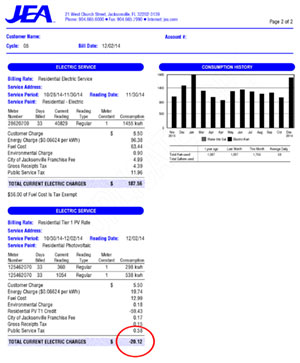 JEA customers with PV Solar Power have a meter on their homes that tracks the amount of power they receive from JEA and the amount their solar system sends back to the JEA grid (photo above is of a meter from a TerraWise Home showing both power used and power returned.) The basic program provides an annual accounting of total power used and returned. If more energy was returned the homeowner receives a check based on the total kilowatt hours at a kilowatt/hour rate determined by JEA.

Before the program change in 2018, JEA basically paid the same current rate per Kilowatt/Hour as they charged. It made for a very sensible program that encouraged homeowners to add solar power to their homes turning their roofs into solar energy generating stations with a reasonable timeline for recouping the investment.

And it worked. Many of our TerraWise buyers opted for Solar Power packages with their homes. And most had (and where grandfathered in under the old Net Metering program continue to have) excellent monthly savings by generating and selling power back to JEA (see the JEA bill shown on this page for an example.) TerraWise buyers were not alone as many existing homeowners were also retrofitting their homes with PV Solar Packages.

The program change caused homeowner solar power to crash by wiping out most of the incentive to invest the upfront cost. The difference under the new JEA Solar Program is substantial: instead of buying back solar at the current rate, JEA has a new formula that basically pays the homeowner a fraction of the rate for power generated and then sells it to others at the full rate. While our homeowners still enjoy lower energy bills due to our energy efficient designed homes, TerraWise has only had one buyer add a solar package since JEA changed the program.

We applaud JEA and other electric utilities around the state for their efforts to build solar power stations. But we also know they killed a program that could have turned thousands of homes into mini solar power stations adding to the overall good of the environment by further reducing the need for publicly generated electricity.